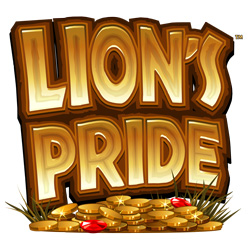 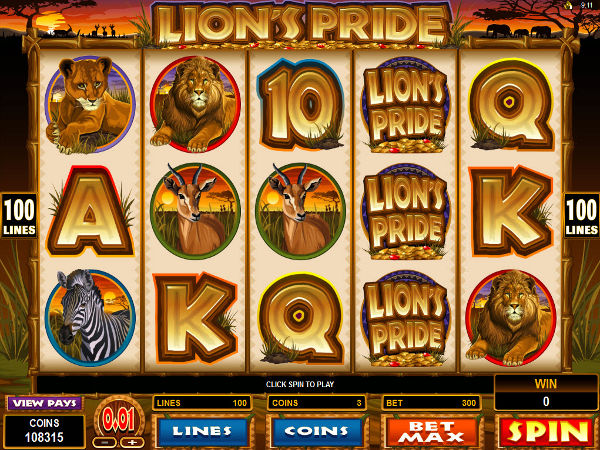 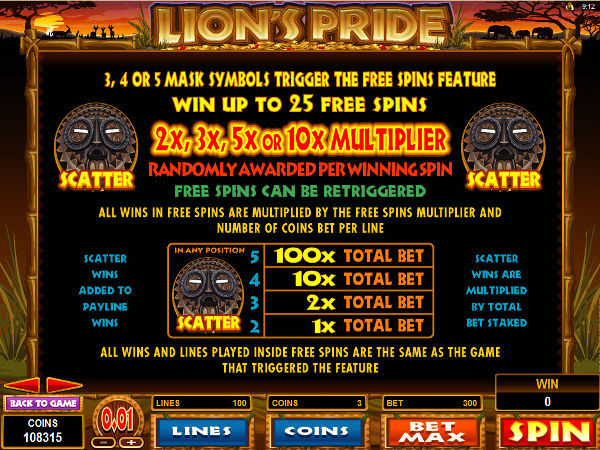 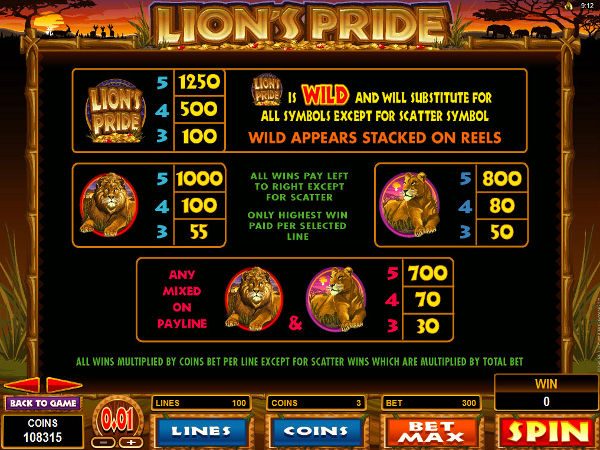 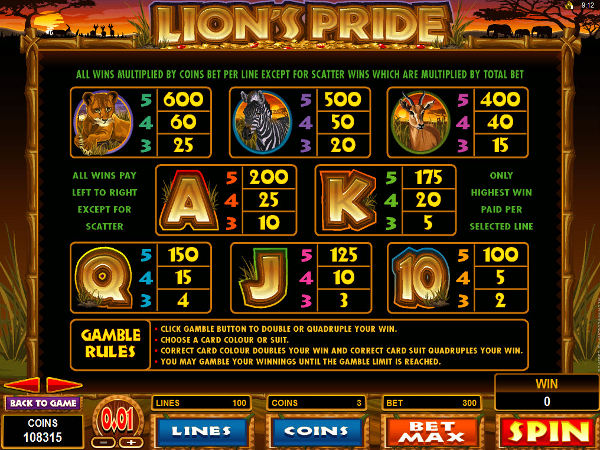 Like in 50 Lions, we're back in the African wilderness for Lions Pride. Online pokies rating often involves comparing similar games, so we'll highlight a few ways in which these lion themed slots titles are similar and a few in which they're different.

First of all, Lions Pride is produced by Microgaming rather than Aristocrat. Neither one of these is better than the other, although some Aussie players would probably agree that Microgaming puts out titles that feel a little more modern and look a bit smoother.

This game is particularly popular in South Africa but, with lots of paylines and a great bonus round, it's well-liked in Oz too. Let's take a closer look.

Lions Pride plays like all your typical 5-reel 3 row online pokies. Australia players have seen this type of game a thousand times before, so there's nothing stopping you from laying out some AUD and getting straight down to playing.

Choose your coin value and how many credits to bet per line, up to a maximum of five, and you're ready to start spinning the reels. Hope you're feeling lucky...

As well as gazelles and zebras, symbols in Lions Pride include a pack of lions – you'll encounter the king of the pride, a female lion and a cute (but no doubt very dangerous...) cub too. The Lions Pride symbol is a stacked wild that substitutes for anything except scatter symbols. I have to admit that I didn't encounter as many wilds as I would have liked – I had hoped that the game's wild theme might have helped me out on that front(!) – but I think that was just down to a run of bad luck.

The graphics are a little smoother and more evocative than 50 Lions, and the game still looks great despite having been around for quite a while. Music and sound effects, your typical safari style muzak, don't add a whole lot to the experience but certainly help to set the mood. You might find yourself humming Lions Pride's theme for a while after playing...

Lions Pride's pokies rating definitely jumps by a few points thanks to its excellent bonus round. Get three or more African masks in one spin and you'll trigger up to 25 free spins as well as a multiplier between 2x and 10x.

It's not uncommon for Australia online pokies players to encounter bonus rounds with 20+ free spins, but ones with a multiplier of 10x are much less common. With tens of thousands of coins up for grabs in the bonus round, Lions Pride is worth a look for that reason alone.

Of course, there's always the risk that you'll slog away at the game for a while only to end up with a 2x or 3x multiplier, but even then this should bolster your bankroll to keep playing in pursuit of a higher multiplier. And, because the game has 100 paylines, you'll already be enjoying regular smaller wins as you play.

Lions Pride is a great title, which explains why you'll find it at so many top online casinos. Wins occur very regularly and the red/black mini-game is an excellent way to top up that bankroll if you feel confident enough to bet with or against a streak.

With double the number of paylines that 50 Lions has, not to mention the potential double the number of free spins in the bonus round and a great multiplier to boot, my Lions Pride pokies review has to be a glowing one—of the lion themed pokies out there, this one is definitely the king.

The graphics are slick and smooth, it's incredibly easy to play and it's got a high payout compared with other animal themed machines. If you're at a loss as to which Australia online pokies title to go with and the venue you're playing at has Lions Pride, you could do a LOT worse than spending some AUD on Lions Pride.