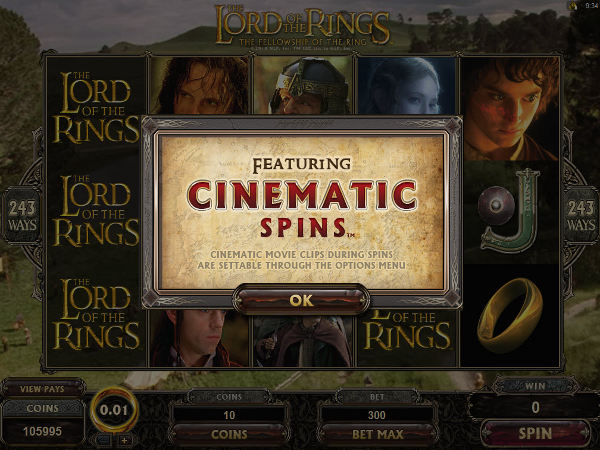 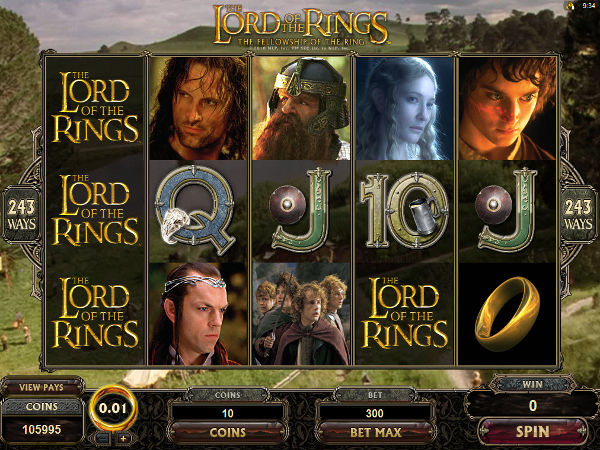 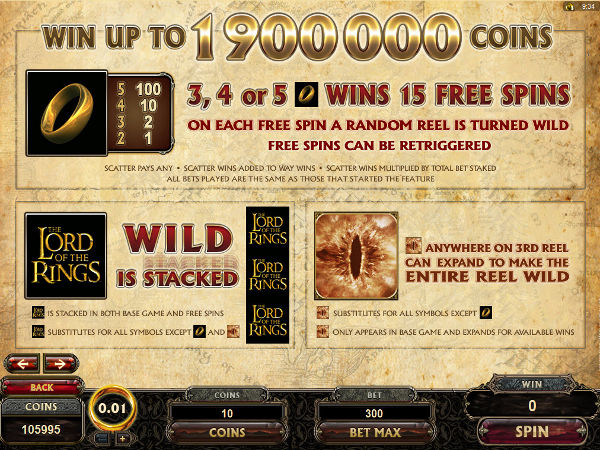 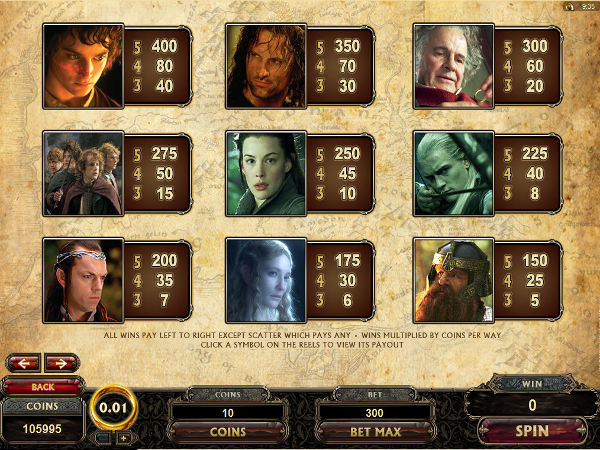 As well as telling you all about the features of the game in this Lord of the Rings online pokies review, we’ll also be telling you why it was almost never released at all. A partnership between Microgaming and Warner Bros, this was a very controversial title because J.R.R. Tolkien's family were very unhappy about the LOTR franchise being associated with gambling.

You may have seen Lord of the Rings slots in land-based venues in Oz, also fraught with controversy, but the online title is actually a completely different game by a different casino game producer.

Lord of the Rings has plenty in common with other 3 row 5-reel online pokies. Australia players can dive right in without any fear of getting confused by the game.

To get started chasing, in the words of Gollum, 'the precious' you just need to choose your coin value and then you're good to go. With lots of ways to win and two different wild symbols, you can expect to rack up a large number of small (and hopefully some bigger too) wins even if you're only playing for a relatively short time.

You don't need to be a genius to figure this one out. The symbols, animations and so on are all based on the Lord of the Rings film series. All of your favourite characters like Gandalf, Aragorn and Frodo – as well as some not so favourite like Saruman – are here.

The action comes to life during a feature known as 'cinematic spins', where players get a chance to enjoy footage from the movie, but if you're too easily distracted you can disable these in the settings menu. Dramatic music like Howard Shore's Lord of the Ring's score is also here, which really helps you get into the spirit.

Fans of The Hobbit and Lord of the Rings, not to mention Australia online pokies, will be in their element playing this title as it really is one of the best looking games around.

Lord of the Ring's pokies rating gets a nice boost from the rather unique way it handles the bonus round. Find three rings and you'll trigger a bonus round with 15 free spins. There's no multiplier but every time you spin one reel will turn wild, so every symbol on that reel acts as a wild.

Given that there are so many ways to win, the addition of a wild reel means that you can potentially win an enormous amount during the bonus round. All in all, this is actually one of the best bonus rounds we've found even without a multiplier.

There's more good news in that if three more scatter rings appear, the bonus round will be retriggered and you'll get to enjoy another 15 free spins. If you're lucky enough to have that happen, we recommend cashing out your AUD right after and going on a well deserved spending spree!

We have some bad news for you. We've left our Lord of the Rings pokies review on this site for posterity's sake, but you may actually struggle to find the game online. The legal trouble associated with this title means that many casinos just don't stock it, instead offering The Dark Knight – which has very a very similar visual style and gameplay – in its place.

This is a real shame, as Lord of the Rings is one of the best titles out there for Australia online pokies fans and we used to really enjoy playing it. With slick graphics and sounds, plus an excellent bonus round that can seriously boost your bankroll, it really was one of the best bets for Aussie players.

Never fear though. If Batman—now sitting in Lord of the Rings’ spot at most online casinos—isn't your thing, you might find a potential replacement in Dragon Island or Dungeons & Dragons for some fantasy themed slots action.