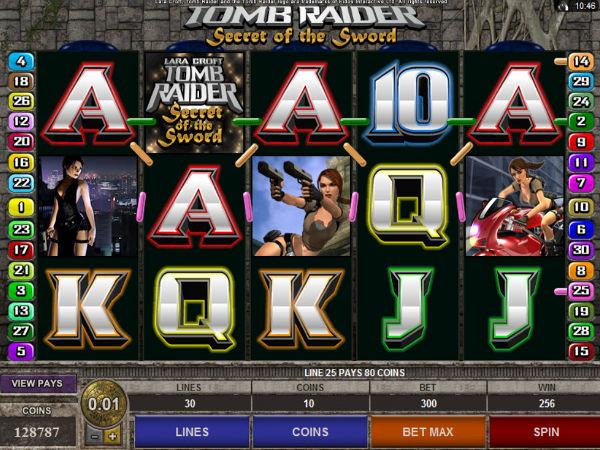 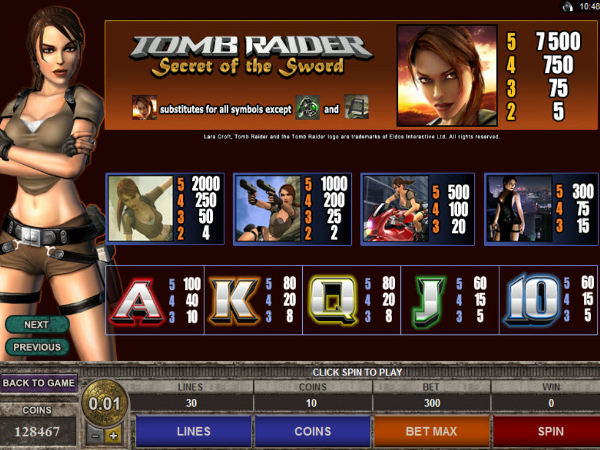 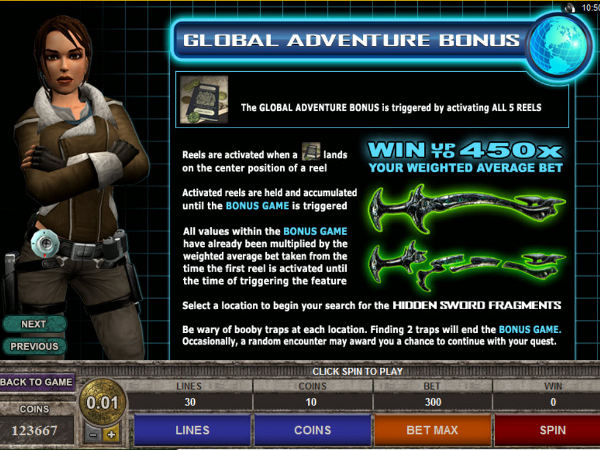 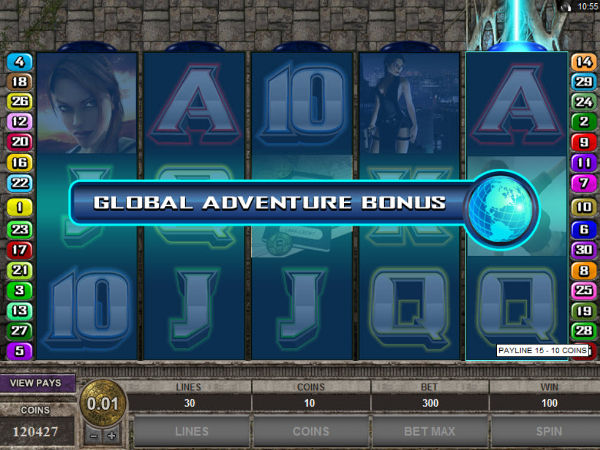 Microgaming released Tomb Raider Secret of the Sword as a follow-up to the very well received Lara Croft Tomb Raider slot. It's worth pointing out that, if you're an Angelina Jolie fan, you won't find her here. Instead, this title is based on the video game series of the same name.

Positioned as a female Indiana Jones, Lara Croft is a well-endowed (no doubt a factor in Tomb Raider's popularity with teenage boys) adventurer who searches the globe for hidden treasure. You might say that Aussie slots players have a lot in common with Lara, although we go about that goal in slightly different ways!

In this Tomb Raider Secret of the Sword online pokies review I'll be looking at how the game compares to the original Lara Croft game, as well as whether or not it has the features and bonus rounds to compete in a very saturated pokies market.

Nothing too different here from most other Australia online pokies; Tomb Raider Secret of the Sword has 3 rows, 5 reels, scatter bonus symbols and assorted paylines. With no option to gamble winnings on a coin toss or card flip, the gameplay is extremely simple so it's dead easy to get started with.

A few noteworthy features and aspects of the game include:

One selling point is that it's quite common to encounter a couple of scatter bonus symbols. Since two of these reward you with double the value of your spin, you can expect a session to last for a while based on that fact alone.

This slot is every teenage boy's dream come to life. The gorgeous Lara Croft is as striking as ever, and is complemented by smooth animations that really catch the eye.

The music is your standard dramatic action movie fare—haunting tones with the odd piano chord and rapid drumbeat mixed in for good luck—but if it's not to your taste you can just mute the whole thing.

The first Tomb Raider game was released way back on the PlayStation and the game looks far better than that, although it's not quite on par with the very latest next gen Lara Croft games.

With two free spins bonus rounds and one pick 'em bonus game, we definitely need to add a few points to our Tomb Raider Secret of the Sword pokies rating for generosity.

The final bonus round, the Global Adventure Bonus, is triggered by 'activating' all five reels by getting a passport symbol in the centre of each reel. You must then pick a destination and some objects to win some AUD bonuses, with a shootout bonus also possible.

With a maximum jackpot of just over the 10,000 AUD mark, you're unlikely to be able to retire on the winnings from this game. Still, my Tomb Raider Secret of the Sword pokies review ultimately has to be a pretty good one.

With three bonus rounds and lots of smaller wins, the game fits the bill of what a lot of Aussie players are looking for when they hit the slots. A life-changing win may be unlikely but the game is fun and exciting and, for those in their twenties and thirties, the game's central character has a certain nostalgic aspect that it's fun to revisit.

Not the best game in the world by any means, but it's an excellent choice for a low variance slot to pass a little time on.