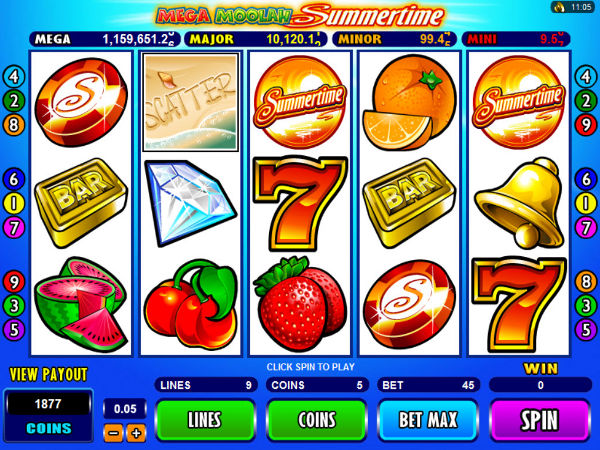 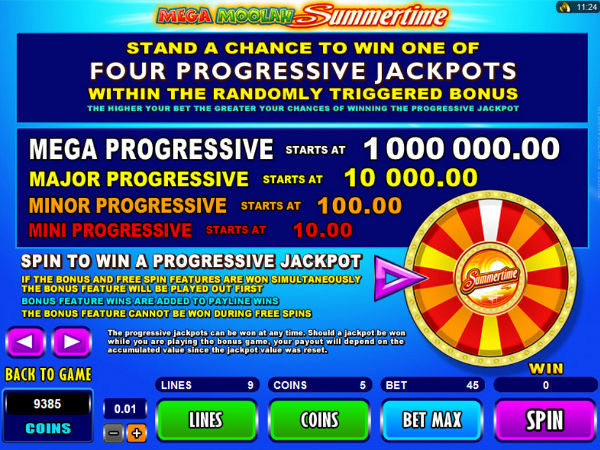 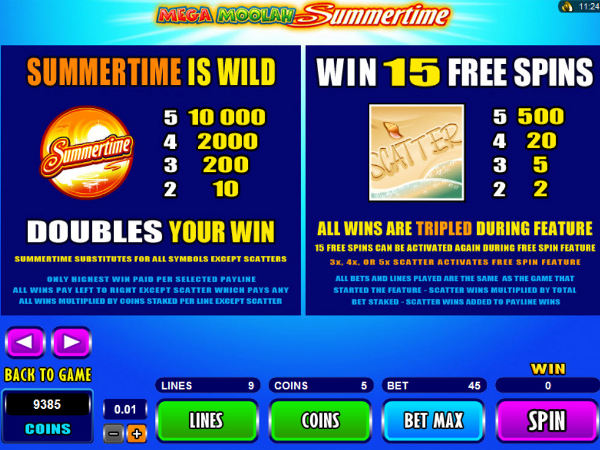 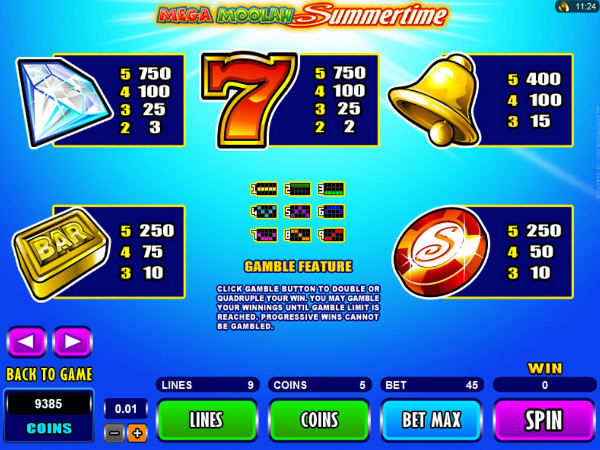 Mega Moolah, the game so nice they named it twice...or actually, four times. While we'll be focusing on Mega Moolah Summertime, online pokies review sites might also offer up the following to you:

Mega Moolah Summertime is the fourth member of the Mega Moolah family, so today we'll primarily be focusing on whether the game has enough to recommend it over the original Mega Moolah.

Like Mega Moolah, and for that matter like most other Australia online pokies, Mega Moolah Summertime is a 5-reel video slots title. What makes it a bit special is its series of 4 progressive jackpots. If you've played Mega Moolah, or other similar 5-reel slots, you'll feel right at home here.

A quick look at some of the features of Mega Moolah Summertime:

Unfortunately, there's no option to go double or nothing here like in many of the titles in our other pokies reviews. Mega Moolah Summertime keeps things simple, so a win is a win and that's that.

The graphics of the game have more in common with old 3-reel fruit machines than most 5-reel Australia online pokies. That's no bad thing, as it gives the game a nostalgic, vintage sort of feel. Still, with so many slick video slots out there boasting gorgeous animations, I'm not sure I'd choose to look at this game for hours on end.

The music is simple, but effective, with a festive steel drum conjuring up images of an exotic holiday. Once again, this is nice but not really anything special. Of course, sounds and visuals can take a backseat when there are jackpots of 1 million AUD or more awaiting you.

Mega Moolah Summertime's pokies rating matches up with its predecessor when it comes to bonus features because the two games offer an almost identical free spins bonus round activated by a scatter bonus of three or more beach symbols.

Like in Mega Moolah, Summertime sees you enjoying 15 free spins with a 3x multiplier and additional bonus rounds can be triggered during this series of free spins. For what amounts to a secondary attraction, this bonus is not bad at all.

Very lucky Aussie players will get the chance to enjoy a randomly triggered progressive bonus. Spin the wheel and you could win any of the following AUD jackpots that build continuously until someone wins them:

The major and mega really could change your life, but the minor and mini can provide some nice padding for your bankroll.

True, the thought of that mega progressive jackpot is enough to keep you going and hungry for more, but Mega Moolah feels like it has more to offer than just that. The graphics are fine, but they're not exactly captivating, and it's probably a game you'd stick on autoplay while you're doing something else.

So is there any time I'd recommend that Aussie players hit Mega Moolah Summertime? Absolutely. If Mega Moolah's progressive jackpot has just paid out while Summertime's is riding high at 5 million AUD or more, I'd make the trade-off and go with Summertime instead.

Bear in mind, that's not because it's more likely that Summertime will pay out, but because I just can't resist chasing those multi-million AUD jackpots. If you're the same way, keep an eye on how the progressive jackpots for each Mega Moolah title stack up.